Hola! It’s been a couple of weeks since my last post but I have been a busy bee. Since my last post I have traveled to two (technically 3 new places), submitted my side project to an incubator for an analysis (and potentially support!), entered and started training for a 10K and celebrated (after today) two birthdays! Plus all of the normal work/life stuff. Travels:*Barcelona – Fun trip with friends over the weekend *Glasgow – work trip for a conference *London/Berhamsted – back home for ice bar bday celebration and country bday celebration Starting off with a trip to Barcelona with some friends last weekend our group of four girls (an American, Polish, British and Scottish girl group enter a Ryanair plane…) took a plan from Stansted and landed in Reus. It’s about an hour and a half away from Barcelona and requires a bus as you can see from the map below.

The Ryanair travel was quite different than I am used to. EasyJet, Ryanair, etc. sell very cheap tickets with the idea that their are no frills. You are allowed one small bag (not a purse plus bag; just 1 bag per person) and it’s a bit of a free-for-all as there are no assigned seats. Just need to make sure you line up early enough to sit with who you want and where you want. I didn’t really mind this too much; at the end of the trip if you arrive on time or early they play a little song. The song is the same as at the beginning of a horse race, right before Trevor Denman would say “and away they go.” So we arrived early and the little song played and everyone clapped. Kinda fun. Then we were off to go through customs (extremely easy as this is a super small airport) and find our bus. We were worried we would be late. This is a tad laughable knowing what I know now. The credit card and money counter machine broke. Plus, our bus driver had no calculator and couldn’t really handle money exchange. He had a LOT of difficulty providing the correct change to each of the passengers and so it took about an hour just to get on the bus! We were a bit tired on our way to the hostel, Casa Gracia, which is located in the centre of the city. I was meeting my friend Dimitri there as he lives in South Spain but is moving back to the states. We arrived and our rooms were not ready which was quite annoying. I hadn’t seen Dimitri in a long time so it was great getting to see him but we all just wanted to change, brush our teeth and get some food. Yummy tapas to be exact. Visited parks, cathedrals, la Sagrada Familia. Saw a lot of the Gaudi buildings which are really quite cool. A couple pics of a cathedral and the park! 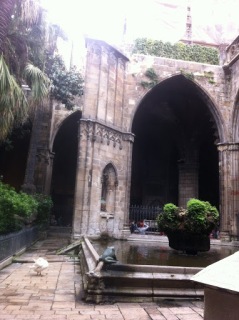 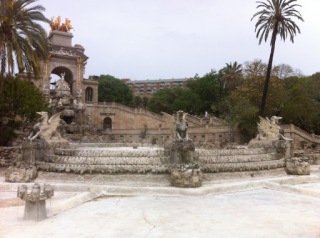 We even played some flip cup which apparently is not common in Europe? This was a pretty big past time for me and my college friends. Apparently in Europe there are not a lot of games to go with drinking – everyone just drinks! haha Next up was Glasgow; for a work trip. Glasgow reminds me of a super small San Francisco (read: lots of hills) but where everyone speaks very difficult-to-understand English. I had the most amazing red bean and sweet potato burger at O’Neill’s Irish bar. Seriously, amazing! I had the most hedious travel and spent a LOT of time waiting on an airplane or at the airport. We even had to change planes at Gatwick airport and take a bus to go about 20 feet to ensure that no one got injured. Quite crazy but all of the staff were very pleasant and I would rather be safe than sorry! London: Saturday night I took my friend Lucy out for her birthday to the Ice Bar. Had visited this bar with Drew when he was here and I love it. They have such amazing food. Took a couple pictures as well. Recommend (highly) the goat cheese starter. Also, I think choosing three small plates versus one large and 1 small is the way to go! The drinks are overpriced but the delicious food and ambiance makes it worth it.

Bad news was that someone stole my wallet. Kinda common here but still bummed me out. As that was my last night to drink alcohol for the next month it was a sour note to an otherwise lovely evening. I have been training for my upcoming 10K which isn’t until July 8th. Also, would love to lose about 10 pounds before our Croatia/Brussels/Brugge/Amsterdam family trip at the end of June. Cannot wait! Now off to Berkhamsted since we have a Bank Holiday – yay for May Day! 🙂